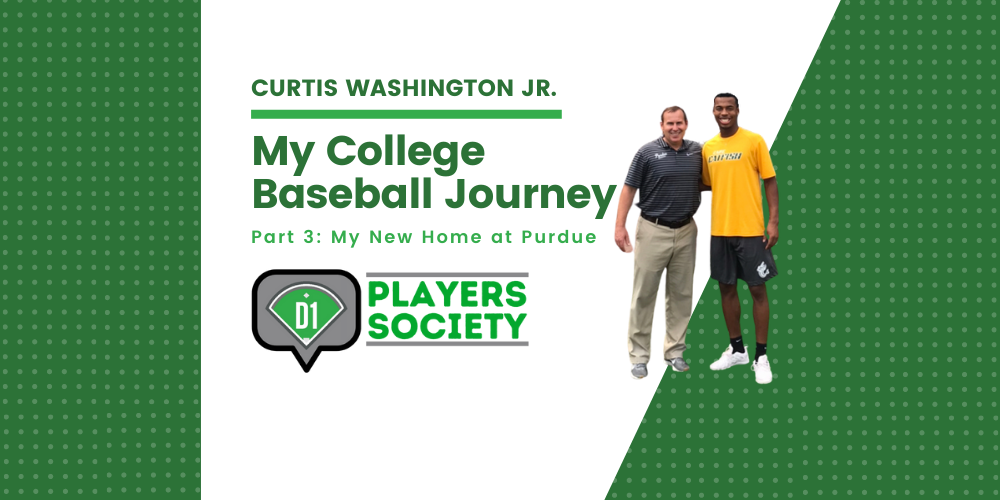 While I was at Wabash Valley, the recruiting process did not stop at all, and this time was full steam ahead. As you might have read in Part 1 of this series, despite ending up at Arkansas, the recruiting for me process out of high school was basically in non-existent. So, this time around, in was somewhat mind-blowing to have Division 1 schools consistently reach out to me, tell me they were interested in me coming to play for their school, and actually offer me a scholarship. It was all I dreamed of as a kid growing up and I finally got to witness the process.

In the fall of 2020, is when I was getting calls and being reached out to from multiple schools. Kansas State, Mississippi State, Louisiana, Purdue, UAB, and Campbell all reached out to me in the fall showing interest and offering a scholarship for me to come play for them.

The new found ‘attention’ was overwhelming at times, but the coaches at Wabash Valley did a tremendous job helping navigate everything. What I was looking for was to find a program/school that was a good personal fit for me and a place where I’d have the opportunity to compete for a starting spot right away. Many schools will tell you what you want to hear in the recruiting process, so I’m very fortunate that Wabash head coach Rob Fournier and the rest of the staff were veterans of the college baseball landscape and were able to help me along the way.

With those criteria in mind, over the 2020 Thanksgiving break, I committed to continuing my athletic and academic career at Purdue University. Purdue baseball’s assistant coach at the time, Cooper Fouts, who is currently coaching at Louisiana Tech University, reached out to me really early in the fall and was the most consistent communicator out of all the schools that I was considering. I mean, Purdue even reached out to me when I first put my name in the portal when I was leaving Arkansas.

Looking back, obviously, my ability on the field played a big part in my recruitment to Purdue, but I think there were a couple of other traits that made me appealing to the coaching staff at Purdue. First, was my experience and the leadership that came from that. I’d been through the wringer of major college baseball before. I’d played in big games and been to the College World Series. I witnessed what it took to perform at that level and I think the coaching staff wanted someone like that on their team. Second, was my personality. Let’s face it; the Big Ten isn’t known for its swagger. I bring a certain personality to the Boilermakers that I think is needed on every team!

Electric bomb out of @swaggyc5. Also the accent on the announcer is almost more electric than the bomb itself @PurdueBaseball pic.twitter.com/clutEB7g1A

I know myself as a player, and I felt like I would fit right into what the program was building. Cooper offered me a scholarship that I couldn’t refuse and knowing how great of an academic and athletic program Purdue was, I was ready to make my decision and end the recruiting process for the year so that I could just focus on performing in the upcoming spring season at Wabash Valley.

Back At The Top

Like much of my recruiting journey, my recruitment to Purdue wasn’t necessarily normal. Due to COVID, I wasn’t able to physically go on an official or unofficial visit to Purdue’s campus at the time. It all worked out though! At the end of the summer of 2021, I was playing summer ball in the Prospect League with the Cape Catfish out of Cape Girardeu, Missouri. We made it to the championship series and played the Lafayette Aviators, a team from Lafayette, Indiana, which is right next door to the home of the Purdue Boilermakers in West Lafayette, Indiana.

I was able to visit and tour the campus with our head coach Greg Goff, and assistant coach, John Madia (at that time). It was such perfect timing that I was able to stay in West Lafayette once the championship series was over with a couple of Boilermaker teammates Kyle Wade, Avery Cook, and Calvin Shapira until I was able to move into my new apartment since classes started in another week. 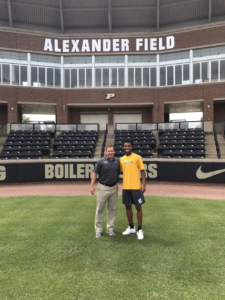 The feeling of being back at a power-5 Division 1 school is like no other. Since I got a taste of what it’s like at this level during my freshman and sophomore year at Arkansas, I was extremely prepared for all of the nuances of college baseball that I was about to face on and off the field.

I felt right at home as soon as I stepped on Purdue’s campus. Once I got moved into the new apartment, I met my roommates (SHOUT OUT 334 members) Jake Jarvis, CJ Valdez, and Sam Franco.

We started fall ball immediately once classes started back up the first week of school. What stood out to me the most is how much work was being put in and the intensity of each practice/scrimmage each and every day. It could be a Saturday with the Purdue Boilermaker football team having a game that day, and we’d be out there grinding on the field and/or in the weight room putting work in. We were going to make sure that we got our work in for the day before we did anything else outside of baseball and I loved every bit of it.

What a season it’s been so far! We got off to the greatest start in Purdue Baseball history, going 15-0 to kick off the season. During this time,e we found out who we are as a team. We are gritty, athletic, full of energy, and don’t care who we play, where we play, or what the weather feels like; we can get the job done if we work together as a team.

At the time of writing this, we are sitting 22-9 overall, and we are looking to continue to get better as a team and continue to win, win, win. We want to work ourselves into the Big Ten Tournament and compete for a Big Ten Championship. If we can take care of that, well, you know what’s next!

We all are bought into what the team wants to accomplish. I feel bad for whoever is in the way of us and our goals because the Boilermaker train is rolling, and its only intended destination is success.

Trey Faltine: Breaking Down His Top Plays At Shortstop
Scroll to top