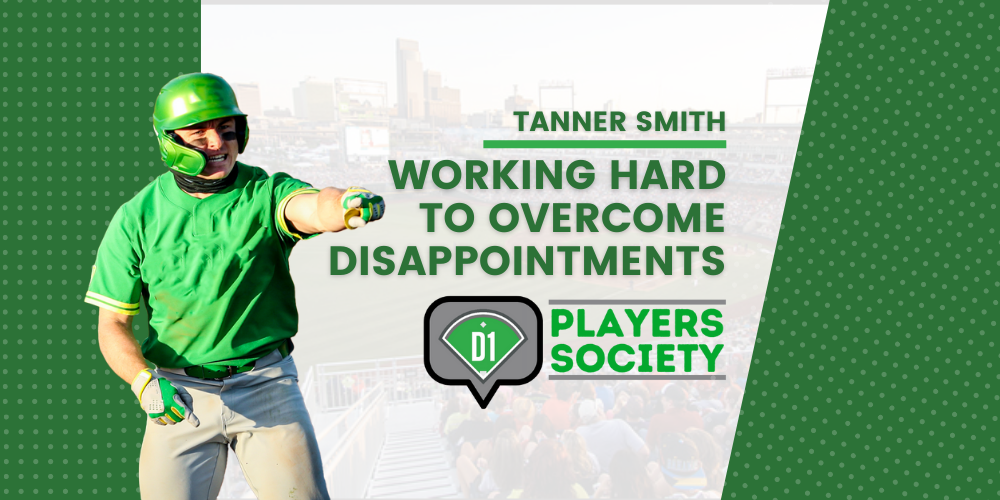 The conclusion of the 2021 season was a double dose of bittersweet for me.

The sweet part came first. Oregon was not only in the postseason for the first time since 2015, but we were also hosting. We went 37-14 in the regular season, and 20-10 in the Pac-12, just a half-game behind first-place Arizona.

We were the No. 14 national seed, and LSU, Gonzaga, and Central Connecticut State all had to come to Eugene to play us. We beat CCSU in our first game, and Gonzaga upset LSU. Then we beat Gonzaga and LSU beat CCSU. We had two chances to beat LSU to move on.

But the fashion in which our team’s season ended was bitter.

We lost the first game against LSU, 4-1. In the final game, we were up 7-6 in heading into the top of the eighth, after I had scored the go-ahead run in the top of the seventh. After the first two batters got out, I reached on a single. We wanted an insurance run, so I attempted to steal second, but I got thrown out to close out the inning. LSU went on to score three runs in the bottom of the eighth, and our season was over.

We were two innings away from a super regional appearance, and just like that it was gone.

The second mixed bag for me was about a month and a half later in the MLB Draft. I was a COVID sophomore last year, but because of my age, I was eligible for the draft.

I’ll be honest, I was expecting to be picked somewhere in the 20-round draft. I hit .324 in a tough Pac-12 in 2021. So when I didn’t hear my name among the 612 names that were called, unquestionably I was disappointed.

It was a personal experience that was truly bitter and sweet. Bitter because I truly believe I’m ready to compete and succeed at the next level.

But sweet because I get another opportunity to compete for a national championship with amazing teammates and coaches at Oregon.

No One Rises To Low Expectations

Candidly, I probably could have hunted down a minor league contract as an undrafted free agent and cashed a small five-figure check after not getting drafted in 2021. But once my team got eliminated from regionals and then I didn’t hear my name called over those three days in July, my expectations for my team and myself changed.

Looking at myself, I decided I needed to get much better in the offseason so I would be ready to help my team in 2022. Because after a 2021 season when we competed hard in the Pac-12, hosted a regional, and were a few outs away from moving on to continue our chance to get to Omaha . . . no one should need more motivation to improve than that.

Like any other athlete, my focus in the offseason is to identify and improve on my strengths and try to eliminate my weaknesses. I use the phrase “smarter, faster, stronger” to focus on what I can do to become a better baseball player. That means evaluating all my training routines to achieve those three things.

Studying pitchers’ moves, deliveries and tendencies should make me an even better, and more important, a smarter hitter. Incorporating explosiveness drills to improve my first step should make me faster. Improving my nutritional habits and weight room workouts will make me stronger.

In addition, playing in the Cape Cod League against some of the best college talent from across the country gave me an opportunity to continue to improve and learn as a baseball player on a daily basis. (Editor’s note: Smith hit .278/.356/.435 with four home runs and 23 RBIs for Yarmouth-Dennis.)

At the end of last season, I looked at my stats and realized that I could steal more bases. Last year, I had Kenyon Yovan, Aaron Zavala and Gabe Matthews hitting behind me. The need to steal a base and get in scoring position with no outs or one out was not an absolute necessity. But I have been focusing on being able to read pitchers’ moves to first base and getting appropriate leads, and I hope to incorporate those lessons this season.

On the mental side of the game, anyone that says hitting is easy is probably just a slow-pitch softball player.

I have always felt that my ability to hit at this level of baseball is a gift from God. And it’s a gift that requires me to refine and improve on it every day. Swing mechanics have to become muscle memory because you do not have time to think about it in the batter’s box.

Once you have your swing mechanics down, how you mentally approach each game — each at-bat, each pitch — will determine exactly how good you are, or can be, as a hitter. I have focused this offseason on being “mentally present” for each moment of my training, particularly with hitting. Every drill, every BP pitch, every swing, I make sure I’m 100 percent engaged in what I’m doing in that moment.

Training and improving is not just an individual pursuit, though. The list of players I have learned from since I have been at Oregon is long . . . too long.

I have been fortunate enough to be in the Ducks starting lineup since the first game of my freshman year. Still, standing in the outfield at Texas Tech during my first game, facing a Red Raiders team that was No. 3 in the country at the time, was somewhat surreal. I’m reminded of the line from “The Wizard of Oz,” when Dorothy turns to her little dog and says, “Toto, we’re not in Kansas anymore.”

I’m sure my face showed my anxiety in the pre-game. Lucky for me, I had teammates like Ryne Nelson and Jacob Goldfarb to pat me on the back and tell me I belonged there. They instilled (or brought out) the confidence that I needed at that moment. I have never forgotten that, and I try to share the type of leadership with younger players who find themselves in the same situation.

I recognize how lucky I am to be around some of the best players in the country every single day. Gabe Mathews, Cullen Kafka, Hunter Breault, Aaron Zavala, Kenyon Yovan . . . again the list goes on. They all share similarities in addition to talent: They are intense competitors who expect the best out of themselves. They believe in themselves and their ability to perform well in big games and big moments. That belief and self-confidence are critical to excel at the college and professional levels.

In addition to my teammates, playing at Oregon under our coaches — George Horton my freshman year, and Mark Wasikowski the last two years — has been a blessing. You can’t help but become a better player and better person under their tutelage. Their track records for graduating players and putting so many of them into the pro ranks is testimony to that.

Whenever I’m back home in Southern California, people ask me, “Wow, isn’t it hard to play baseball or become a better baseball player in all that rain and cold weather up there in Oregon?”

I have to laugh at that for a few reasons: First, the weather is not nearly as bad as people think.

Second, on those days that you do actually hit in the rain or cold, it just makes you that much better when you’re hitting in the sunshine! Third, thanks to donors like Phil Knight and Pat Kilkenny, we have some of the best facilities in the world to ensure that athletes at the U of O will never be at a disadvantage due to the weather.

As the saying goes, you can only control what you can control. I know since the final out of last season, I’ve worked as hard as I ever have to improve my game. Pair that off-season work with everything I’ve learned from my coaches and teammates during my three seasons at Oregon, let’s just say that I’m very excited for the 2022 season!

Make sure to follow the D1 Players Society on social media 👇

Tyler Ruetschle: A Day in the Life with Ball State Baseball